September has historically been the worst month for the stock market, but this year was an exception. US stocks finished the week, month, and quarter on a high note, with the S&P 500, Nasdaq, and Russell 2000 reaching all-time highs on the last day of the quarter. The S&P 500 gained 1.9% for the month and 3.9% for the quarter – its eighth consecutive quarterly gain. The Dow rose 2.1% during September (its 6th monthly gain in a row) and 2.1% over the quarter. The Russell 2000 closed at a record 21st time, rising 6.1% for the month and up 5.4% for the quarter. The possibility of tax cuts provided momentum to the small cap index, as smaller companies typically pay higher taxes than large companies. And the Nasdaq posted a 1% gain over the month marking its 50th record for the year, and providing a 5.8% rise for the quarter. Strong earnings and fundamentals were cited for the impressive gains this quarter. Investors were also encouraged by the release of a more detailed outline of a tax reform plan.

Nine of the eleven S&P sectors posted positive returns over the month. Technology shares rose the most, gaining 8.3%, primarily due to the strength of the FAANG stocks (Facebook, Apple, Amazon, Netflix, and Google). Technology has exhibited hurricane-like strength for the year, rising nearly 26%. Energy was the runner-up, with a 6% gain, reversing the 2017 loss of 9%. Energy remains the only sector to remain in the red this year. Telecommunications was the third-best performing sector for the month, rising 5.6%. Consumer Staples was the worst-performing sector for the month, losing -2%, while Consumer Discretionary and Real Estate declined slightly dropping -.5% and .1%, respectively.

During September the yield on the 10-year Treasury increased more than 20 basis points for the largest one-month rise since last November. The selloff was due to hawkish comments from the Fed last week that indicated another rate hike in December (the current probability is above 70%) and concerns that a tax overhaul could significantly increase government spending. The Federal Reserve announced that they intend to keep the federal funds target rate between 1% – 1.25% due to the strong labor market and inflation remaining below 2%. Of more significance, they also said they plan to reduce their balance sheet. During the financial crisis, the Fed engaged in “quantitative easing” by purchasing Treasury bonds and mortgage-backed securities to add liquidity to the financial system. This grew the balance sheet from under $1 trillion to about $4.5 trillion today. The balance sheet reduction will take place in “baby steps”, by letting holdings mature, rather than through sales. This gradual reduction of the balance sheet and the fact that interest rates are still way below historical averages should not have a significant impact on the market.

Oil prices marked their first quarterly gain of 2017, with WTI closing at $51.67 a barrel. Oil rose 7.7% for the month and had a quarterly rise of 10.5%. of the month and 10.5% for the quarter. The possibility of a disruption of Kurdish oil exported though Turkey was offset by continuing growth from US shale.

Once again, economic indicators showed mostly positive monthly results. The Chicago PMI jumped to 65.2 from 58.9 in August, showing an acceleration in private sector activity. Any reading above 50 indicates improving conditions. Consumer spending rose 0.1% last month, after a .3% rise in August, in line with expectations. Personal income was up .2%, versus a forecast of .1%. The University of Michigan’s consumer-sentiment gauge slipped from 96.8 in August to .95.1 in September. The Consumer Price Index for All Urban Consumers (CPI-U) rose 0.4% in August on a seasonally adjusted basis. Over the last 12 months, the all-items index rose 1.9 percent.

The fourth quarter is historically the market’s strongest, with the holiday months usually providing strong performance (see chart below). Since 1950, the S&P 500 has gained 3.9% on average during the fourth quarter, advancing nearly 80% of the time. Furthermore, when the S&P 500 has been up more than 10% year to date and posted a new high in the month of September fourth quarter returns have been close to 6% in 11 out of 12 years. However, as always, past performance is not indicative of future results. 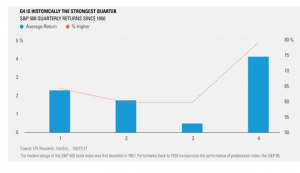